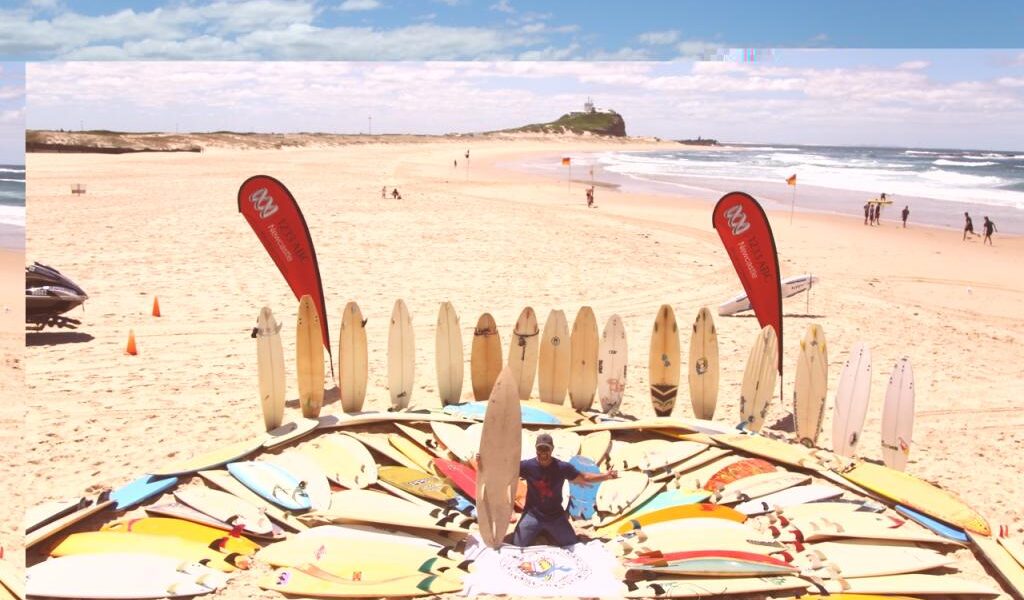 Great things done by ordinary people happen every day all over the globe. It is only when you are personally touched by a particular ordinary individual and his incredible, life-changing mission you realise you too, can be part of that person’s vision.

There is an ordinary bloke from Papua New Guinea (PNG) who came to Newcastle on the 22nd of October 2014 and left with over 300 donated surfboards, many other surf craft and surf clothing and equipment. Who is this bloke? How did he pull this off? What was the message in a movie that moved not only a crowded movie theatre, but a large slice of the Newcastle community?

This man’s story goes back 27 years. Jump forward a couple of years ago when surfer and ABC1233 Newcastle (NSW) radio producer, Ben Millington went to Papua New Guinea on a surf trip. What he saw was indelibly imprinted on his mind.  On this trip he witnessed the amazing people of Wewak, East Sepik province on the northern edge of Papua New Guinea doing something he had never seen before or since.  Located close to the Indonesian border, Wewak is the capital of East Sepik Province.

A short 45 minute flight northwest along the Papua New Guinea coastline facing the Bismarck Sea is the small timber town of Vanimo in the Sandaun Province.  The inquisitive journalist in Ben soon discovered that about 27 years ago a pilot, oddly named Captain ‘Crazy Taz,’ flew into Vanimo with Chief Pilot, Drew Salter. He brought with him a surfboard. Like every keen surfer he went for a surf. The reaction of the villagers floored him. He saw them already deeply immersed in surfing using shortened timber planks as belly boards in the surf. Feeling impressed, ‘Crazy Taz’ left his surfboard in the village. This one surfboard not only started PNG’s obsession with surfing it became the genesis of significant cultural and social change that is happening in Vanimo today.

When Ben saw the locals carving surfboards out of the forest timbers and actually surfing these crude and potentially harmful lumps of wood he knew he had to tell the world about this phenomenon. A seed of an idea germinated in Ben’s mind for quite a while. Then he connected with the ordinary man doing extraordinary things.

Andrew Charles Abel, ML or Andy is a proud man of mixed English and Papua New Guinea blood. He is a third generation member of one of Papua New Guinea’s pioneering missionary and political families dating back to 1891. Andy is built close to the ground. A muscular surfer who is quietly spoken, like I imagine most indigenous Papua New Guineans are. Andy is also the driving force behind the emerging PNG surfing community. Presiding over the Papua New Guinea Surfing Association (SAPNG), whose motto is ‘empowering communities since 1989,’Andy, the President and co-founder of the Association is directly responsible for a ground breaking cultural change transforming attitudes in a fiercely patriarchal PNG society.

About 27 years ago Andy made a conscious decision to bring about change in his PNG community. He had had enough of the domestic violence towards women that had become an everyday event in his society. To make this change happen he chose the vehicle of surfing as the wedge to activate a transformation. But changing the attitudes and behaviours of an ancient society of people who have suffered the cataclysm of imperial occupation in both peace time and war was not an easy task.

Abel set about building organised and accountable groups of surfers based on their location and surf break. Across the surfable areas of PNG, Andy and his Association, made up of a governing Board and network of affiliated surf clubs and corporate members, built an impressive foundation the envy of sporting bodies and niche tourism sectors.

Inherent in the charter of the PNG Surfing Association is a direction that the affiliated surf clubs are inclusive of women surfers in their competitions and administration. One can imagine the difficulties Andy faced in making this happen. He needed something to show his people, the country’s leaders and the world, including those resistant to change in the surf clubs, and traditional resource custodian host communities that through inclusive surfing they could bring about equitable and sustainable change in their communities.

Between 2003 and 2007 the opportunity presented itself. First time documentary maker, American, Adam Pesce, a Diplomacy and World Affairs student at the Occidental College in Los Angeles, USA had embedded himself into Vanimo village after seeing an image of a smiling young Papua New Guinean boy riding a broken surfboard while With two cameras, a stack of film and a couple of surfboards he was determined not to return without a film. He learnt the local language of Tok Pisin, acquired a couple of doses of malaria and produced the landmark and highly acclaimed prize winning documentary, Splinter. The movie world premiered at the Tribeca Film Festival in New York City, USA in mid 2011. For nine months, six of which he shot alone, Pesce documented the life and hardships of the villagers of Vanimo. This record unabashedly included the ugly face of domestic violence. The women of Vanimo who wanted to surf with the men had to risk violence and family ostracism.

Enter Andy Abel and the Surfing Association of Papua New Guinea Inc (SAPNG). Andy had been to Vanimo back in 1988 and was impressed with how resourceful the villagers were with only one old surfboard as inspiration. Andy immediately saw the potential for Vanimo to become a surf tourist location of some note but he didn’t want to see the PNG owners of the surf locations lose control of their resource or their culture. It has been his mission to elevate PNG surfing to world standard while entrenching a culture of gender inclusiveness in the local clubs by aesthetically blending the modern world and ancient customs without denigrating the host communities’ way of life: a monumental task of which it seems he did not waiver.

Driven by his passion as a surfer and emulating the dedication to public service and country of his late grandfather Rev Charles Abel and late father Sir Cecil Abel KBE OBE, Abel, in his own unique and innovative way used the cutting edge approach of his Abel Reverse Spiral Model. This model ensures an equitable and sustainable platform in the negotiation, planning, implementation and management of the surfing resource. The successful outcome of which is a win-win for all stakeholders and more significantly, guaranteeing the traditional resource custodians do not end up being mere bystanders and beggars in their own land like many others parts of the region and world.

Uppermost in Andy’s mind was the fact 97% of the land is owned by the people including the fringing reefs where the best surfing spots are located. In a further complication Andy had to also carefully negotiate both Matrilineal and Patrilineal traditional laws and customs in each province he has established the SAPNG network of partnerships around PNG.

No easy feat and not something an average ordinary person or surfer would take on. As a volunteer for the past 27 years his single-mindedness has brought about momentous change for his people.

Jump forward to 2007. Andy had achieved success in organising surfboard clubs in those locations where the surf would attract visitors.  In order to bring the clubs together in the spirit of fair play and inclusiveness he organized the inaugural 2007 PNG National Surf Titles to be held on the lefts and rights off Vanimo. It was a requirement for each club to enter a female surf team consistent with ISA competition rules. The winners of the event would travel to Australia for a competition and training at the Surfing Australia high performance surf centre on the Gold Coast before competing in the 2007 Pacific Games in Samoa.

Splinters climaxes at the National Surf Titles in Vanimo. The lead characters of the documentary, Angelus the older man and top surf dog of the village, wins the event and is selected to go to Australia.  Unfortunately for him he had some serious domestic issues of alimony and his failure to pay. He ends up in the lock up. His young protégé Ezekiel from the same club, the Sunset Club, takes his place alongside Lesley the best female surfer in the village.

Eliminated in the earlier heats the second best female surfer in Vanimo, Susan, who is Lesley’s sister, misses out on her opportunity to represent the SAPNG and her country. It was evident in Splinters Susan’s husband was not happy with his wife pursuing her dream at his expense.

There is a confronting scene in the movie where the brother of one of the surfing girls of Vanimo beats her into unconsciousness in broad daylight in the public market.  You feel sickened and saddened by the scene but when you realise what Andy and his selflessness has done to bring about sustained and equitable change in PNG society you are motivated to join him in this just cause.

And that is exactly what ABC1233 producer Ben Millington has done. The ABC crew organised a campaign called Operation Drop In where listeners across the greater Newcastle and Hunter Valley (NSW) were asked to donate surfboards and surf gear to the men, women, boys and girls of not only Vanimo but also to Andy’s new project, the people of Bougainville and all ten of its affiliated surfing clubs around PNG.

Central in Andy’s gratitude to the people of Newcastle was his commitment that 50% of the surfboards would have their noses painted fluorescent pink. These surfboards are for the exclusive use of female surfers consistent with SAPNG policy of empowerment of women and the continuation of an equal platform whereby aspiring female surfers in the traditional resource custodian host communities are able to enjoy the stoke we take for granted as surfers.

Following the movie Andy was asked a number of questions by the audience. Without hesitation he warmly thanked the audience and the people of Newcastle but he did not miss the opportunity to tell all about how powerful the effect of ‘pinking’ up the women’s surfboards was in the village. He was at pains to say domestic violence is not exclusive to PNG. As a worldwide problem it can only be overcome when attitudes in the home change. He reminded the audience that we are all responsible to make a collective difference in our homes and communities.

Since the release of Splinters in 2011 there has been fundamental change in Vanimo village. Women are now recognised as equals in the surf and all SAPNG surfing communities around PNG where SAPNG has established a footprint. With the increase in PNG owned surf tourism it seems this change will be reinforced and continue as foreign surfers share the perfect waves of PNG. Visiting surfers now have an opportunity to assimilate with the resource custodian host communities without the crowds. This is a guarantee under the clearly defined SAPNG policy on the Surf Management Plans (SMP). One cannot but stand and applaud Andy who has been at the forefront of creating and implementing this policy which is now the focus of academics, universities and surfing nations around the world.

Over 300 second hand surfboards, a dozen boogie boards, a large quantity of leg ropes, surf wear and other accessories were donated through Operation Drop In. In addition $3000 has been raised through Splinters tickets sales and donations.

Soon Andy Abel will travel to Bougainville where, accompanied by a distinguished Australian supporter he will hand over half the Operation Drop In surfboards. The plan, to start a new chapter in bringing about inclusiveness in surfing in PNG.